I’m willing to bet that the average Texan associates the word “team” with football. As a noun, the definition of team specifically refers to those competing in a game or sport. I believe in teamwork more than anything and, even as a Texan, I associate team with theatre more than anything.

Technically, the appropriate term is ensemble, but, whatever…teamwork still makes the dream work.

This ensemble relies on the unique skills that each member can bring to the table. Acting, dancing, vocals, playing an instrument, playing MULTIPLE instruments, playing obscure instruments (there’s a concertina in this show, for crying out loud).

I asked ensemble members Matthew Russell Cook, Kat Kratzer, and Jo-Jo Steine, to tell me what this incredibly unique ensemble experience has been like for them. Once (intended) again, I discovered more shared sentiments in their stories.

To begin, they all admire each other/were scared of each other. The combination of actors-that-can-play-instruments and musicians-that-also-say-words that make up this ensemble apparently left them all awestruck. In Matthew’s story he calls himself, “…some dope that does Irish music that hasn’t set foot on a stage as an actor in years, in the middle of all these real actors that do this for a living.” Meanwhile, Jo-Jo, who considers herself an “actor first,” reported that, “It was a bit of a shock entering the world of Once where the actors also play their own music. At times I worried that I didn’t belong amongst such talented musicians. Watching someone pick up four different instruments, or sing and play at the same time like it was no sweat, or even just confidently take the stage and claim their space for a jam session? Intimidating.” Kat Kratzer simply stated that she does “not envy some of [her] castmates their mental aerobics as they make sure they have dropped off one instrument one place and picked up another somewhere else!”

To me, this all sounds like a recipe for success. A cast full of some of the most multi-talented people that I know and all of them in awe of each other’s talent? If I were a director, that’s exactly the kind of ensemble that I’d be looking to put together.

Mentioned multiple times, in multiple ways, but this ensemble is a PRIME example of teamwork. As I previously stated, this ensemble is made up of performers that come with their own unique skills. Jo-Jo outlined in her response: “We’ve got some brilliant comic actors that will make you laugh, some really intense dramatic actors that might make you shed a tear, and some people that haven’t done much acting at all. For every person that considers himself primarily a musician, there is someone like me that considers herself an actor…or a singer, or a dancer, or an improv comic, or a soloist, etc.” But the group effort required here goes beyond putting together these talented puzzle pieces: it’s listening. The need to listen to your fellow performers onstage isn’t unique to the Once ensemble, but it’s a little more involved. Kat Kratzer talks about this in her piece: “While we still lean on our Music Director, Scott A. Eckert, for cues, musicality and overall direction in rehearsal, it is a different story once we are in performance mode. We really have to be in tune with what is happening on stage with each other and we don’t get those same musical cues from a conductor at the beginning or ends of scenes. It forces you as an actor/musician to be hyper aware throughout the show of your track and what is happening next with which instrument you might be playing, but also of the people around you and their track.” If you read the rest of her piece (linked below), you’ll see her explain the level of trust required for this. We all know that there is no team without trust.

Speaking of trust, this ensemble is devoted to each other. Based on their collective reactions to the first rehearsal, I’m pretty sure it was love at first note. Matthew wrote of his first rehearsal experience: “I was in it, in the thick of it, and there was nothing I could do to turn back. But I told myself to lock it up, because what I had just been a part of was, for lack of a less cliché term, magical.”

It’s not a rare occurrence for a cast to fall in love with each other and the art they are creating. A feeling akin to the love you had for your high school basketball teammates or debate team. A love and respect that develops out of commitment to a common goal and the commitment to each other required to achieve said goal. This cast is no exception. It’s just that this cast sees more of each other. More of each other’s talent and more of each other’s weakness. This musical demands a lot of its ensemble but not the same things from everyone. Steine says it best, “We’re all being pushed out of our comfort zones in some way, but that just means that collectively, we are stunning in every category.” 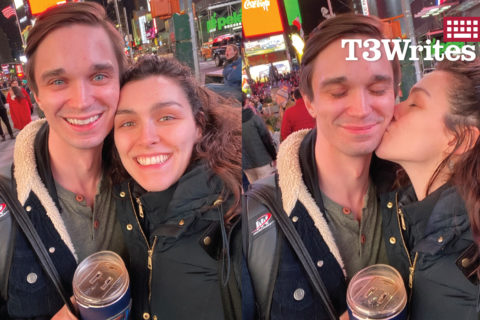 May 1, 2020|Once, Outside Perspective, Work Life Balance

Theatre Three Alumna Cora Grace Winstead talks a little about what it is like to be a working actor.
………
An actor’s life is often described…

We recently asked supporters of Theatre Three to contribute to our blog, podcast, and silly videos to help us in our pursuit of providing equal parts…

Read More
Back to the top