By Craig Boleman with introduction by Jeffrey Schmidt

As a theater maker, I love contradictions. I love when a character is deliciously complicated, meaning they say one thing but mean another. Often great theater happens when the heart and the head clash, like in our current production of The Armor Plays: Cinched and Strapped. James Crawford plays Ved, a character conflicted by his love for his wife and his duty as a soldier to hunt and kill her.

In our third installment of the Subscriber Blog series we look at a contradiction of sorts. Theater exists to challenges traditions and break down pre-conceptions, but going to the theater is a tradition all unto itself. What a delicious complication! One of the great joys of working for a 57 year old organization, is hearing from patrons about their favorite memory of Theatre Three. Often, I hear stories that concluded in a Theatre Three experience that became a mile marker in a patron’s life. We speak ad nauseam about the benefits of subscribing to Theatre Three, and, perhaps, the best perk of all is one we that’s hard to quantify; the memory-making potential for you, your family and your friends. That’s a tradition worth keeping!

When my wife, Kass Prince, and I moved to the DFW Metroplex in December 1997, Kass was adamant that one of the first things we needed to do was attend a show at Theatre Three. Kass grew up in Richardson and loved both Jac and Norma. In fact, Norma was the best friend of Kass’s college theater professor (Pat Cook). Pat invited Norma to work with theater students and may have even lead a workshop or two during Kass’s time at Baylor University. But even before that, Theatre Three held a special place in Kass’s heart because it was the first theater to which her mom subscribed. Kass was a teenager when her mom became a season ticket holder. They attended every performance together until Kass headed for Waco to study theater at Baylor.

One of the first shows Kass and I saw at Theatre Three was The Fantasticks with Jac and Jerry Haynes (Mr. Peppermint) as the fathers. They were hilarious! From the moment I walked in to the space, I was fascinated and intrigued by the theater-in-the-round. (Side note: Kass and I met doing theater in College Station, Texas.) As actors, we absolutely loved how the creative teams used the space. And seeing the audience’s reactions was a real treat too!

Like many, our lives became busy. I opened (and was working to grow) a full-service advertising agency in Las Colinas and Kass is the Assistant Executive Director at the Irving Arts Center. Because of our schedules, we couldn’t subscribe but frequented shows when we could. A few years ago, I was contacted about the possibility of our firm assisting with the marketing and communications of Theatre Three. I was elated. They didn’t know it, but I’d always dreamt of seeing my firm’s name in their programs.

The rest is history. Our agency has been working with the awesome Theatre Three team for a few years now and it’s a truly rewarding experience. I’m excited about how Theatre Three is evolving under Jeffrey Schmidt’s artistic leadership. Jeffrey’s productions are always flawless and they challenge the theater-goer. Plus, he gives a great curtain speech!

Kass’s mom passed away one year ago. I think about her every time I walk through the doors at Theatre Three. She recognized Kass’s interest in theater when she was a teenager and immediately supported her daughter by becoming a subscriber. If she hadn’t fueled Kass’s interest by taking her to Theatre Three performance, I’m certain our lives would be different. God bless you Venelle Prince.

It’s an immense pleasure to be an opening night season ticket holder and a donor. I can’t wait to find out what’s next for Theatre Three – a truly special place in our hearts, souls and DFW theater community!

Break all the legs, 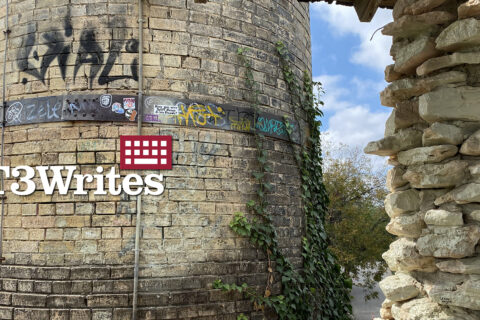 Early in the pandemic T3 made a promise that even if we can’t produce theater, we were going to talk and write about it. Even in the off season, you…