I went back on stage two weeks after my first baby was born. Some people were shocked, some were downright appalled. Why would I continue such a “frivolous” endeavor when I’d just had a baby? Wasn’t it time to “settle down” and “get serious” about life? The truth is, many theatre-makers stop working when they started having kids. And I don’t blame them. Both parenting and theatre-ing are difficult jobs, both require almost your full attention 100% percent of the time. (yes. 100%. just try going to the bathroom as the mom of a toddler or doing 9 performances a week of A Christmas Carol). I don’t begrudge anyone choosing one over the other. But for me, having a baby made me more determined to make a go of it. I wanted my daughter (and then my son) to grow up watching their mom doing what she loved. I wanted them to know it was absolutely possible when THEY start having kids. That if you love something with all your soul, the pursuit is worth it.  It was never easy finding the balance, but the lessons learned both by me and children about hard work and commitment have been infinitely rewarding. I didn’t plan it that way I just thought that’s what all working women did after they had babies; go back to work. After all, the world keeps moving: things must get made, merchandise must be sold, crops must be picked, and the show must go on. Enjoy Kristen McCollum’s (Dottie in Noises Off) account of a day-in-the-life of an ACTOR-MOM.

I thought, when I was cast in Noises Off, that my work would be made a little easier by the fact that my daughters, now in high school, are both driving.  It hasn’t.

Let me start with a typical (for us) weekday.  Both girls go to Booker T Washington HSPVA.  They’re in the theater conservatory (both their dad and I are actors so it was kind of inevitable).  At the time my rehearsals started, they were already in rehearsals for the Ten Minute Plays Festival at the school – and these rehearsals happen before school starts.  So on a normal day, the alarm goes off at 6am.  I then have to walk my dogs to ensure no accidents happen while we are gone.  Girlies wake up, get varying breakfasts due to varying diets, are given their lunches and then sent on their separate ways in their separate cars because they both have separate things to do once school ends.

At this point I get the house back in order while simultaneously tracking them on the Life360 App to make sure they make it to school ok.  I realize this makes me sound like a mom stalker (malker?) but we have an agreement that I won’t pester them with texts about their whereabouts if I can always be able to find them 24/7.  It’s the new world order.

Depending on the week, the rest of the day could be a mix of gym, errands, house cleaning,  docenting at the DMA, voice over job/audition, teaching a class at Booker T or coordinating meals for Feed the Kids at their school — my volunteer job — where, when the theater conservatory has performances, we feed the students involved with the show (both tech and actors) after school.  I also should be memorizing lines and stage directions for this show because it….is….daunting.

Then, again depending on the day, I coordinate dinner for myself and the kiddos while making sure the dogs are let out and the chickens are put up (I forgot to mention the chickens…just know there are chickens).  Then I head to rehearsal.

Rehearsal is a blast because the people involved are amazing and the process is fun but you can start to feel it the later it gets.  And I’m getting texts about college applications (my oldest is a senior) and if my youngest (who’s a junior) can go to a friend’s house or buy something online and all the while I’m still tracking them on the Life360 App (seriously don’t judge me even tho teenaged me is not having any of it).

Then rehearsal is over and on the way home from the theater I call them to hear about their days.  I get home around 10:45 — sometimes we watch a show — this is how we decompress as a family.  Lately it’s been Parks & Rec (it’s short and AWESOME).  Afterwards I put them to bed and straighten up the house, pre-make as much of their lunches as I can and write their lunch quizzes — because yes, I am that mom.  Then I’ll wash my face and, if I’m awake enough, go over what we did at rehearsal and make notes, both physical and mental.  After that I’ll write the times both girls have to wake up in the morning on my hand with a sharpie so that when I wake up I can look down and know exactly what I’m doing.  Finally, me and my a-hole boyfriend (also known as Rory the dog) will snuggle into bed and I’ll tell Alexa to set the alarm for 6am and the whole process starts anew.

So yeah.  It’s complicated.  Even with kids who can drive.  So why do it?  When I was asked this question I thought the answer would immediately pop into my head like “duh…this is why…it’s obvious”.  But it didn’t.  It kind of trickled in a little at a time.  It’s not for the money.  It’s not for the “fame” – tho’ maybe in my younger years I was doing it as much for the art as the applause.  No.  Now…it’s the minutiae.  It’s arriving at rehearsal and walking from the parking lot through the backstage door, past people who have no clue what you’re about to do…  It’s signing in (when I remember) and it feeling like it’s the morning and the start of the day even though most rehearsals happen at night.  Saying hello to cast and crew mates and hearing about their days — some of them friends you’ve known for years and years and some you’ve just met.  The exploration…my everyday life is so structured and regimented with logistics, and I work super hard to create a peaceful and positive home environment regardless of what may be going on in my head…that to be able to play someone else who can go a little bananas and take emotional risks is a huge release for me.  Honestly, most times I love the rehearsal process a little more than the actual performances.  But the performances are pretty great, too – especially when my daughters are in the audience.  I also tend to rarely leave my happy cave so it’s also a chance to see people I adore out in the real world.  And it’s the beautiful ache of when the play closes; the delicate sadness that comes with the impermanence of theater and, in larger terms, the impermanence of life.  It’s a reminder of how to truly live.

That’s why I do it.  And the really really really cool thing is that now I get to watch my children do it.  That I’ve been able to be a part of giving this incredible gift to my kids — and that they fully immerse themselves in it and totally get the minutiae — it’s beyond anything I could ever have imagined as a parent.

So yeah.  Doing theater as a parent can be challenging.  But oh my gosh…the rewards. 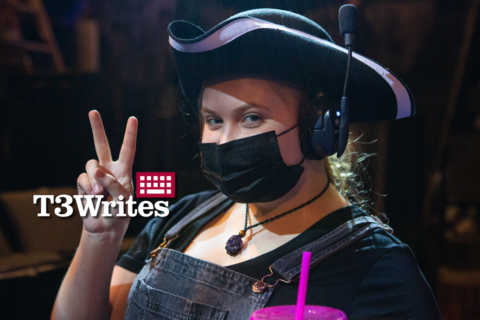