You can see Leslie Collins as Elizabeth in Mel Brooks’ Young Frankenstein, running now until November 13, 2022!

What a delight working in theater is! I love it. But getting the jobs have been hard over the years. I have had my own nightmare stories about booking theater gigs and I thought I’d share one of my most memorable, just in time for Halloween… because this story still HAUNTS ME!

I got a callback for Cabaret back in the early 2000’s. This was the revival, the Alan Cumming years of Cabaret, and I had been lucky enough to secure a callback after a general EPA for Cabaret. I had sung at that first audition and also notated that I played multiple instruments. Now, if you will remember, this was the tour that had the cast play all of the music. The casting notice stated you had to be proficient, and even though the last time I had touched my trumpet was the 8th grade, I figured I was proficient “enough” and I could charm them into believing I could relearn it all quickly if cast. I was in my 20’s, very green and very eager to make it in NYC,

So I rented a trumpet to start, and started practicing quickly after I got the callback notice. The callback was not that far off (days) so I would have to make quick work of it. I hadn’t touched a trumpet in 10 years, so I had a lot of ground to cover. Clearly not as proficient as I stated at my initial audition, I thought… I can do this! It won’t be easy but it will all come back, I’m sure of it! After hitting a dead end with what new song I could learn in time, I decided on that old classic “Hot Cross Buns,” a song known for its subtle calming tune and difficulty level. If I remember correctly, I hired a trumpet teacher for an hour (I was broke and couldn’t afford more than that) to help me prepare and I do remember him sort of baffled at the end of the hour and his advice was to stick with Hot Cross Buns and “good luck.”

I also said that I played piano. I can play multiple instruments, you see? I do have a minor in piano (because my college required it) it but I can certainly tell you… I cannot play piano. BUT alas, the desperate-to-work actress said she could play two instruments proficiently. Well, let’s just say that 2 days of bleeding ear drums and what must have sounded like horrific fart noises from my trumpet, I was ready to audition and my neighbors were ready to call the cops. I never had a great relationship with my neighbors after my trumpet training.

Well, the day came and we sang first. I have no idea what I sang. I blocked it out. I think I did OK though. I do remember the waiting room was full of girls all tuning up their instruments and they appeared to be profoundly more talented than I. Everyone sang well too. Then came the dancing part. Now, I am no Baryshnikov but I can do a little Fosse and I think I did, “OK” for a singer/dancer. I’m a great “faker,” which has become a theme in my life.

The instrument playing portion was last, maybe for the creative teams own joy and delight… they saved the best part for that last slot? I’ll never know.

Well, I was warming up on my instrument. Stretching mouth and fingers, buzzing my lips, ya know, all the “trumpet-y warm-y-uppy things.” Backstory, I used to be really something special on the trumpet back in the 8th grade. But truth be told, I started playing the trumpet when I had braces on so when I got my braces off, my mouth placement (or “embouchure” if you are French) changed and I was hopelessly terrible. I was demoted from the prestigious first trumpet chair of the 8th grade band to the last chair. I quit the band after that. Ultimate band defeat. So I was rolling in with a bit of insecurity on the audition day that I wouldn’t be any good in front of people. Still, I soldiered on. I lined up in the hall behind other talented girls. I mean, how were all of these girls so good at everything AND even could play instruments? I see violins, cellos, saxophones… you name it, these gals could play it. I listened in through the wall, and they were good. Very good.

My heart is racing. “Miss Collins, you are next!” I put on a smile, breathed deeply, and barged in with positive energy and a huge smile meant to conceal my utter terror, probably very visible in my eyes at this point. I rounded the corner with my energy, and proceeded to bang the sh*t out of my rented trumpet on the door and bent the trumpet bell. The creative team is in shock. I said, “it’s ok, no big deal… happens all the time. It’s good, I can still play it. No big deal” They oblige and say, “Sure? It’s really bent though? Ummm…*** whenever you are ready then?”

*** I still slightly cringe when I hear that phrase, for the nightmare that came after has haunted my soul for years.

I announced my song, “Hot Cross Buns” and the casting director nodded confused and said, “Ah yes, we know that one.” He looked down at my headshot and resume from that point on, making no eye contact. Only using his ears to concentrate on my playing. I brought my trumpet up to my nervous and quivering lips, heart racing I started the song yet no sound came out, just a few awful bleating sounds. I air farted a few more times because I couldn’t get my lips to phonate. I apologized and attempted again, probably 4 times until I blasted out a very off pitch beginning note. The team was stoic. They had a job to do… and that was be professional. They calmly awaited the brilliant masterpiece that was to come. Finally, I finished the song, well…sort of? Well, most of it? Ot at least the notes I could squeak out. I imagine it was similar to how constipated goats sound… when they are in heat. I know that was, by far, the most memorable version of Hot Cross Buns that Broadway has ever heard. After 3 minutes of pure trumpet bliss, they stopped me by waving a hand furiously and said, “That’s OK, you can stop. You also play piano?” How about we hear that instead?” I said, “Ok, yes. I minored in it in college. Sure, Of course. So, I sit right here at the piano?” They nodded. I sat down at the upright piano and played my college proficiency recital song with the flare of Liberace. I had to make up for what I just did on my trumpet! I was moving back and forth, side to side with each extremely basic piano chord as if I was competing in the Van Cliburn competition. Oddly, that didn’t help me play any better.

After a long pause and a hopeful look that they’d ask me for another song, they said, “Thank you. I think that’s all we need from you Miss Collins.” I stood up, grabbed my bent trumpet and thanked them for having me. They all looked stunned. In all honesty, I was stunned too. Oh how it ended up so differently than what I imagined! I figured they’d cast me so quickly by my singing, perky attitude, decent dancing and minimal piano/trumpet skills, Now, I realized that I had bombed.

As I backed out of the room ( still don’t know why I walked backwards), with my trumpet in hand, I ran into the large trashcan situated right by the door, knocking the trashcan over and spilling the contents. I awkwardly grabbed a few wet coffee cups, tissues, papers and trash with my spare hand to try to help but I looked up at them in that moment, only to see that face I know so well, “Just go, just go, just get out of here.” They said nothing. Nothing.

As the door closed and the next girl prepped to follow in behind me with her instrument, I heard a collective guffaw from the ENTIRE CREATIVE TEAM of 4 or 5 people.

I was crushed. What a horror. Of my own making. Still love that girl who tried to pull off that epic stunt. She failed and it wasn’t the only time she failed but she got better and better and went on to do really awesome things.

For every awesome show that I have ever booked, there is probably the equal amount of hauntingly bad auditions. I guess I’ve learned a lot about myself, what my limitations are and in some way, how bold I am.

Too bad for the first national tour of Cabaret though. They really let a great remedial trumpeter and pianist slip through their fingers.

Reprising a role is something I have become familiar with over the last 12 years. Playing Lt. Foster , annually, in Pegasus… 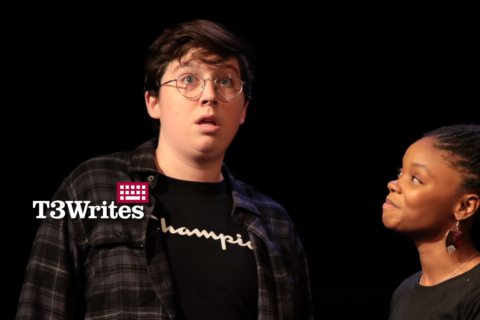