This round-about story is about how The Immigrant by Mark Harelik ended up in the current season at Theatre Three.  My name is Merri Brewer, and I have been an actor at Theatre Three (in Blankity-Blank, in Travesties, and most recently in the live streamed reading of Matt Lyle’s The Texas Devil), I have served as the organization’s Managing Director, as a consultant, and most recently, I was the Assistant Director for The Immigrant.

In my capacity as Managing Director, I often had the opportunity to mingle with the patrons attending the Wednesday Hooky Matinees. That is where I met subscribers Jack Repp, and his ladyfriend, Sarah Yarrin.  It was always my pleasure to assist them in finding their seats and to chat with them. Here’s the thing about having a chat with Jack Repp:  about 5 minutes into one, he’d roll up his shirt sleeve, show the number tattoo on his arm, and tell you about how he survived the Holocaust.

He was born on Aug. 16, 1923, in Radom, Poland, and his name then was Itzik Rzepkowicz. He had survived the atrocities of the concentration camp by focusing on good memories and the hope of the war’s end. He served the U.S. Army upon his liberation – as a spy of sorts, helping the Americans find and imprison and even execute Germans who had slaughtered Jews. He immigrated to Greenville, Texas, and became a shopkeeper. He’d tell you about how he was a national speaker about his survival, and how he’d written a book about it.  I adored this gentleman and his special ladyfriend and I bought his book so that he could autograph it for me.  Sarah wrote the sentiment, and Jack signed his name.  It’s a precious possession to me. 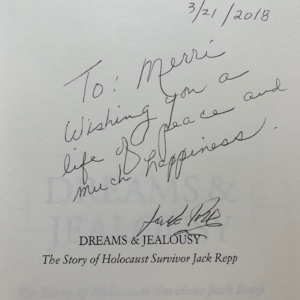 We also talked about theatre, about what he and Sarah might like to see on our stage.  I asked if he had ever seen a play called The Immigrant? I told him it was about a Jewish immigrant to Texas who became a shopkeeper, kind of like him, but earlier in history. He thought it sounded really good! He wanted to see that play! I was familiar with the play because Miki Bone’s Actors’ Theatre of Dallas had a successful production of the show in the 90s, starring Dean Nolan as Haskell Harelik. That was how the play bubbled up out of my memories and into the forefront of MY mind.

Then, about two and half years ago, T3 Artistic Director Jeffrey Schmidt hosted a Pizza Pitch Party, to listen to elevator pitches of plays that folks thought T3 should do.  It was an exercise in transparency and empathy (and outsourcing!), and about 100 people, a wide swath of Theatre Three stakeholders, pitched about 150 plays. I’ve never heard of an Artistic Director welcoming suggestions in this way, it’s very unusual.  I pitched Vietgone by Qui Nguyen and The Immigrant by Mark Harelik.

Schmidt has talked about questions he asks when considering the production of a play. Why Theatre Three?  Why this play? Why right now?  This play ticked a few boxes, including being beautifully written with a lovely structure and with affordable production elements.  He likes plays set in Texas, about Texans, by Texans. CHECK. Theatre Three has many Jewish patrons, and he hadn’t yet selected a story just for them. CHECK. And there are immigrant families in cages at our border. Check.

And then a pandemic happened. Live theatre is not a current option.  Through sheer pigheadedness (Schmidt’s) astounding creativity (also Schmidt’s), and a creative use of technology (Schmidt again), this very timely story is being told, and told beautifully. I hope you watch it.  I’m very proud of the part I played in making this piece of art.

Sadly, though, dear Jack Repp died peacefully in his sleep in January, 2020.  I hope someone reading this blog can make sure that Sarah Yarrin reads it, and I hope someone helps her access The Immigrant. I know she’d really love it.

If you’d like to hear more about Jack Repp’s survival story, he tells it on this video:

And if you’d like to read his book, written with Rabbi Dan Lewin, you can buy it here:

And if you’d care to make a donation to the Dallas Holocaust Museum, there is a link here: 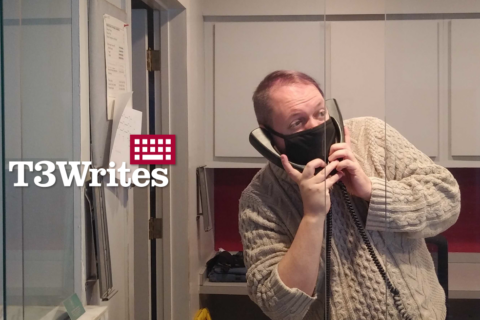 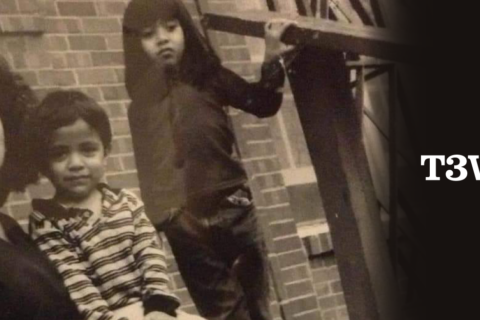