There’s a line in the show “Adventure Time.” Something about magic, madness, and sadness being in a closed circuit with each other. I think about that line a lot, because the less you know about how anything works, the more magical it seems, but the more you study a particular thing, the more likely you are to get lost in the madness and sadness of it. My partner likes to heap compliments on me whenever I write a new song, saying something like, “I just don’t understand how you’re able to craft music out of NOTHING,” and I often reply with something like, “it’s STILL NOT GOOD ENOUGH,” and this is all a roundabout way of me introducing the catalyst of my journey, which was a deep loathing towards modern musicals.

Musicals have never been better, more popular, and more watchable than they are right now. They’re vibrant. They’re catchy. They’re fun! They’re communicating in new ways with new audiences like never before, and that thrills me. I just don’t like any of them.

Jeanine Tesori refuses to stick in my head.

Pasek and Paul are just writing secular praise-and-worship music, and nothing you say will convince me otherwise.

Even when the dark comes crashing through,
When you need someone to carry you,
When you’re broken on the ground…
Jesus is Lord!

Normal people LOVE this music, as well they should! These composers are all masters of their craft, and they’ve crafted masterpieces, and I wish I could enjoy them, but I fell into the Magical Music Hole a long time ago.

I remember when the feeling really became strong several years ago. While I was studying how music used to be centuries ago, I was hearing modern musical theater songs, with their formless structure and wild key changes, like they were just GUESSING at what music should be like PLEBEIANS, and I would just get so MAD ABOUT IT.

I can’t justify these feelings, other than with this quote I once heard from a pulpit:

So what do you do when you want something done right?

I began to write. I wanted to make a musical that I could love. It would be a quintessential game-changer in the industry. It would blow people’s minds.

Who was my inspiration?

And what subject would be my muse?

Fun fact: There are TWO official Sherlock Holmes musicals, one from Broadway and one from the West End.

“Sherlock Holmes: The Musical” was produced in 1989, which is truly everyone’s favorite era for musicals, with such hits as “Les Mis,” “Chess,” and “Andrew Lloyd Webber.”

“Baker Street” was produced in 1965 and had Jerry Bock of “Fiddler on the Roof” in the composing team, so how has it not preserved itself as a musical theater staple? Probably for the same reason the critic Benedict Nightingale (Is it fake? Or is it British?) quipped in his review of its successor: “Sherlock Holmes the Musical is about as likely a notion as Einstein the Clogdance.”

But MY musical would be different. Because MY Sherlock Holmes… was going to act like the Great Mouse Detective.

I proceeded to write five songs for “Sherlock Holmes of Baker Street” –three of which I am still exceedingly proud of and two that I will never share with anyone– and then I didn’t touch it for four years, because I can’t write a book for shit.

And also, I was getting to be in a lot of great new musicals locally. They all brought me a lot of joy and really threw a wrench into my musical-hating crusade.

And then I met Nicole.

Every week, it was “You’ve GOT to listen to this song!” or “I’ve made SO MANY cabaret line-ups for you and me in my head!” or “How have you NOT heard of Laura Osnes/Jessie Mueller/Jeremy Jordan/Ben Platt/Ramin Karimloo!?”

And little by little, she taught me two things:
1) Musicals are great, wonderful, and enjoyable, and
2) I used to be wholly insufferable.

Suddenly, it was October of 2019, one month before our wedding, and my fiancée said to me, “I can’t write the play I’m trying to write.”

“That’s ok, you’ll still make something great!” I reassured her, the memory of her brilliant Marilyn Monroe play still fresh in my mind.

“I want to write a play about the worst pirate who ever lived.”

“And I want you to write the music.”

My heart might have actually skipped a beat. “You have come to the right person.”

“You have two months.”

“I WAS BORN FOR THIS MOMENT.”

A number of very sad things had happened to us over the preceding years. Some treasured family members were lost. Some became estranged. We got bed bugs. I was mostly unemployed for half a year. Nicole’s car got towed from our complex for no reason. All were bewildering and painful. Life had felt like a shadow for a long time.

“If I could rewrite my story…”

I cannot describe the joy, the purpose, the fervor, the fire I felt in those two months. Music poured out of me faster and easier than ever before. The madness and the sadness had finally surrendered to the magic. I was a real goddamn human again.

And we finished that one-act musical in two months (give or take a few days), and we had our reading in Theatre Too, a space that holds some of my most cherished memories.

And people saw it.

And I think they even liked it.

Since then, we’ve expanded it to two acts, and Theatre Three offered to develop it.

I could die happy.

So I might have started my journey for the wrong reasons, but I think I finished it for the right ones.

I was never going to get it done on my own. I needed someone I could do something for. I was lucky enough to be found by a partner who loves me and forces deadlines onto me that I DID NOT ask for, because in the end, she gave me the greatest gift: 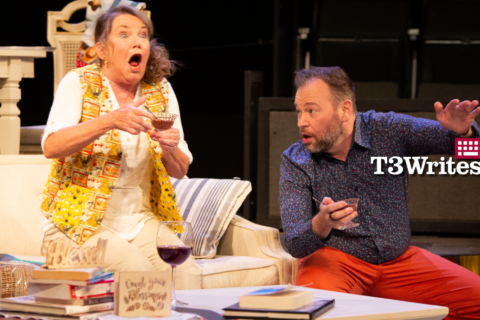 You have some homework to do before reading this blog! August Wilson’s legendary speech The Ground on Which I Stand, delivered to the TCG…