Matt: Okay, so I don’t know who’s in charge of this thing, but I can start it off. Because I have a lot of questions.

It’s sort of a real question. I mean, we just wrote a sex farce set in a small town church. Was there any point when you thought we might step in it?

Matt: Ha! I think we ended up with a pretty sweet screwball comedy with some farce influences. Look, you’re going to step in it with someone these days no matter what you do so you might as well dive in. I think as long as you’re not mean spirited most people will ride along. And, what I like about the sex comedy/church relationship is that we are all, with the exception of you, sexual beings with quirks and hangups and desires, Religion has been really preoccupied by controlling those desires with a VERY spotty history of success. Almost every sex scandal I can recall happened in or around a church. The Baptist church I grew up in had a GREAT one. So, it’s not like we were pulling the concept from thin air.

Matt: Personally, I feel like the editing process was sort of everything. And as much as I hate to do it, I have to give you pretty much all the credit for that. I think you caught a vision pretty early on of walking this tightrope between edgy material and crowd pleasing material. I think we started someplace far edgier and then sort of found “the line.” Once we had eyes on it, we could take one baby step on the crowd pleasing side of that line. And we didn’t scrub it clean, but we definitely polished it up to a point that I honestly don’t think it is in any way offensive. We are clearly (I hope) laughing with everyone and not at anyone.

Matt: I ALWAYS regret not editing more. Brevity is the soul of wit. So some things that will ultimately get cut from the script make it into the first run. Sometimes you need audiences to tell you what to cut. As far as the edginess goes, I just had to do a search for the word “Scrote” and I think it was pretty easy to clean it up from there. Though it is still pretty naughty.

Matt: I am realizing now that I should probably add last initials or something.

Better Looking Matt: Let’s talk a little about the influences and intersections that would lead us to write a sex farce set in a small Texas church. I know we’ve both talked about Three’s Company before as something that made a lasting impression on us both. I know I can remember watching it as a kid in reruns. It was one of a handful of shows you could catch most any day at least once. Three’s Company, Bewitched, Gilligan’s Island. They were all on non-stop when we were kids. And I think I can see their legacy in my sense of humor sometimes. A certain goofiness and silliness that I certainly appreciate. And a complexity. There was always so much happening in those early 80s sitcoms. I love the feeling of being able to see something as an audience member that is just out of the sightline of a character. We’re in on a joke that they don’t get yet.

Matt: Let’s not forget Beverly Hillbillies and Carol Burnett Show . I think the whole thing has a distinct Mama’s Family feel to it. We’re getting so old!

Better Looking Matt: YES to Carol Burnett! And Mama’s Family. I sort of love the feel we pulled off with this play. It has a throwback vibe to it, and I think we have some of those early influences to thank.

And on the flip side of that, we both grew up, to some extent, in and out of small churches like the one in the play. I spent many a summer at a Vacation Bible School in Lewisville, Arkansas. I watched so many kids jump rope while naming off books of the Bible. And there was always a Slip ‘n Slide involved at some point.

Matt: VBS! Great place to try to pick up girls back in the day! I heard some pretty messed up conclusions about life in church and also some really great things I still lean on today.

Better Looking Matt: I feel like you really topped from the bottom in this interview, but I’m perfectly comfortable with that. For anyone reading this with some time on your hands, Raptured: A Sex Farce at the End of the World will be running at Theatre Three from April 25th through May 19th. If you catch it April 29th, Matt and I will be hanging around, lurking in the back of the theater, holding one another. We will each let you buy us drinks after the show as you tell us how brilliant we are. Especially Matt. 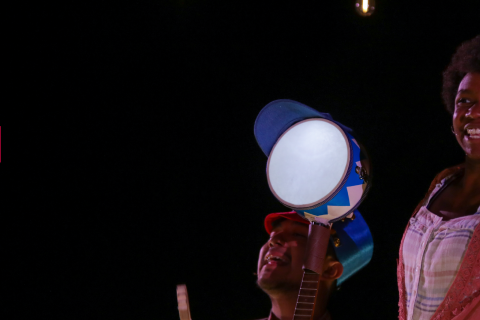 “You have to have amazing cock-ups in the theater, because then you have stories, and then…