“The book is better” is a pretty common response people give after watching a movie, play, or musical based on a beloved classic or a modern favorite. It’s understandable. As audience members, it can be hard for us to see something play out differently than we pictured it in our heads while reading, and it can be difficult to let go of our favorite scenes from a book or see changes to plots and characters we feel deeply invested in.

For my part as a writer/huge movie fan/frequent theater-goer, I try to look at adaptations as something separate from their source material. Film theorist George Bluestone claimed, “It is as fruitless to say that Film A is better or worse than Novel B as it is to pronounce Wright’s Johnson’s Wax Building better or worse than Tchaikowsky’s Swan Lake.” I think this is his very fancy way of saying, we should try to view an adaptation on its own merit and in its own form instead of looking for a one-to-one comparison to the original book or source material. Does the movie work as a movie? Does the play work as a play? What story was the adaptation trying to tell, even if it’s a different story than the one the novel told? To me, the plot and themes of the source material can serve as a jumping-off-point, a road-map, or even just inspiration for an adaptation.

All that said, let me put it out there that director Christie Vela and I love the story of Dracula in its many incarnations. We’re fans of Bram Stoker’s novel, we’re oddly obsessed with Francis Ford Coppola’s ‘90s movie, we can’t get enough of Christopher Lee in the Hammer Films’ takes on the vampire tale, we celebrate the bizarre majesty that is Bella Lugosi, and we even dig that puppet show version in Forgetting Sarah Marshall.

Because we love so much of what has been done with the story, we felt the only reason to bring a new version of Dracula to Theatre Three was if we had something different to say with it. And we do think we have something different to say. Whether you go all the way back to the novel and early film interpretations like F.W. Murnau’s Nosferatu or jump into more contemporary adaptations like the 2013 TV show Dracula or the Dracula 2000 series of movies, the character of Mina (or her modern counterpart) often gets lost in the telling. Stoker and many others set up Mina as a clear protagonist, but as things progress she often gets lost in the story or completely left behind. In some film and stage versions, she even gets switched or combined with the character of Lucy. For Christie and me, the story starts with Mina, and her journey is the one that carries us through. As we quickly discovered, once you start to shift Mina’s role in Dracula, it’s only natural that changes to the plot and other characters will follow.

Don’t get me wrong, you can still expect all the of the fun, blood, excitement, and romance that comes with vampires and vampire hunters, but we think you’ll see a Mina, Dracula, Lucy, Van Helsing, and Harker that you might not be used to seeing, and we’re excited to show them to you. Christie and I believe the horror genre is the best way to explore what we as a culture are afraid of, and what we fear can’t help but change some from era to era, which is why the character of Dracula continues to adapt. Whether you’ve read Bram Stoker’s novel a hundred times and styled your hair in that cool way Gary Oldman does in the movie or you know nothing about the book and really prefer your vampires to sparkle in the sunlight, come check out our take. We think it has something to say all on its own. At the very least, we think you’ll have a great time, and who knows, you might even get a little scared. After all, anything can happen during live theatre. Mwahahahaha!!!! 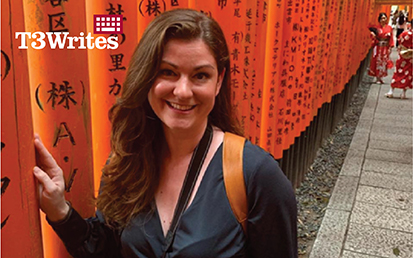 One of the common themes of these things is a narrow…