By Chad Cline with introduction by Jeffrey Schmidt

Both as a director and a performer, I love working with actors who also are improvisers. All acting requires a certain level of improvisation. The performance is live. It will never be exactly the same twice. However, some actors cling to the text while others live for the unscripted moment. Improvisation sometimes can make for chaotic rehearsals, but it’s also a whole lot of fun. When actors get together to tell war stories, they don’t recount the times when things went right. They talk about the times that went wrong and the heroic actor that saved the day! In fact, there’s a huge London and Broadway hit that’s called exactly that, The Play That Goes Wrong.

It’s been my pleasure to direct Chad Cline twice, both times in Matt Lyle comedies. He’s fun to work with, brings great ideas to the table and leverages his improv skills to hilarious effect. Read what he has to say about improvisation and the theatre. Then, come to see him in Raptured, running through May 19th. He’s heavenly. Hint, hint! Double entendre.

Most people don’t know this about me, but I have a pretty high level of anxiety, which at times in my life has been crippling. It’s almost impossible for me not to be in my head, over thinking decisions made or not made at random moments in my life. This makes some things like deciding what to order for lunch nearly impossible. “Do I get what I want? Are they judging my order? Crap, did I brush my teeth? OMG, I was wearing this the last time I had lunch here.”

I enrolled at KD College after leaving UT right before my senior year. I wanted to be taken seriously. I know… super smart! I started wearing more black, smoking cigarettes and bartending. Boom…actor!? We were studying theatre and broadcast, and I was loving it!

You hear people say they do something in life because they have to. I get that. But, I do what I do because I want to. Whatever I do, I do because I love it! I love everything about live theatre; the rehearsal process, repetition, discovery, growth, the smell of sawdust and fresh paint and opening night!!!!! It all reminded me of playing sports as a kid! The prep, the teamwork and the end result. Also, live theatre scares the crap out of me!!!

In my first semester a fellow student asked, “Hey wanna be in an improv group?” I said, “Ha! I’m a very serious dramatic actor who is not working. YES, I will join!” And bam…improviser!? Here comes the anxiety! Will I do it right!? For me, preparation and repetition were ALWAYS necessary, and now I wouldn’t have that security blanket. AND I was not trained in improv! I believe Ralphie in A Christmas Story said it best, “Oooohhhhhhhhh ffuuuuuuuuuuuddgge!”

Around this time, Randy Bennett, original Groundling Member and mentor, was teaching improv in Dallas, so I signed up. My first class changed my life forever. Randy used improv to immediately develop character, emotion, perspective and, of course, dialogue. So in what used to be a HUGE fear (no prep), I now found a calmness. I not only couldn’t think, I just played. I just said “yes” and went. I was out of my head completely for the first time…maybe ever.

I was fully immersed in improv and didn’t make it back to theatre until 10ish years ago. I still perform improv regularly at Stomping Ground Comedy and have been fortunate enough to stay fairly busy with theatre over the last several years. What’s beautiful to me is the crossover; watching an improvised scene that is also brilliantly acted and not necessarily funny, just truth, or seeing an unscripted moment in a play that is covered without skipping a beat. It takes teamwork, and it happens all the time.

When performing in Pegasus Theatre’s Black and White I had a quick draw from my shoulder holster. I practiced until it was perfect and nailed it performance after performance. Until one night it slipped out three lines early during a very clear beat of silence. The audience thought it was hilarious. Thank the Theatre Gods it was a comedy. A couple quick improvised lines to deal with the gun, and we were back in.

Actors sometimes go up on lines and cover for each other which definitely requires improv skills. Actors call forgetting lines “going up”. There are so many examples of using improv in theatre. I could go on and on. But, mostly I’m grateful for that classmate 25 years ago who asked me to join his improv group. To be quite honest, without him, that quick draw fail would have made me SUPER SWEATY!

Improvisation has made me a better actor. More importantly, it’s given me a tool to ease the anxiety  I carry with me every time I walk on stage. Someone way smarter, more talented and better looking than me said, “All the world’s a stage.” Well, improv has made me ready for anything the stage throws at me. 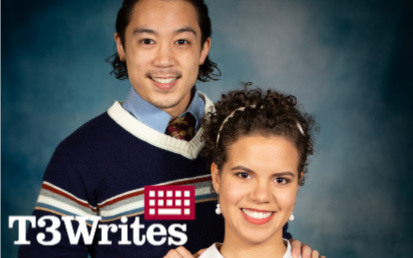 For Theatre Three, the rehearsal process lasts about 3 1/2 weeks.… 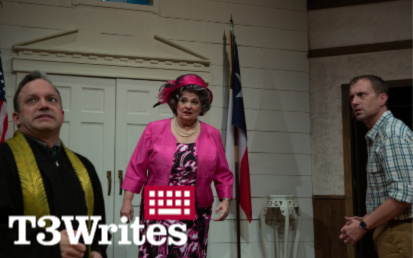 Matt: Okay, so I don’t know who’s in charge of this thing, but I can start it off. Because I have a lot of questions.